Excellence in All the Arts

When I took the SAT in high school, I didn’t study. In the past I’ve told people about it, claiming it was the fault of the standardized testing regime and my not studying was a form of protest. In a lot of ways, the SAT shouldn’t be studied for… the middle word is “Aptitude”. Presumably the SAT measured what you’ve learned in school. I argued that if that were the case, I should take it without studying.

But that’s not why I didn’t study. I didn’t study for the SAT because I knew it would be pointless. I was winging it, big time. And didn’t even understand the implications of doing so. My problem was that I couldn’t retain knowledge, and I knew it. As hard as I could cram for it and memorize information or ways to answer the test or whatever, all that would only overwhelm me and I wouldn’t “learn” a goddamn thing. Deep down, I knew I wasn’t prepared to take the SAT.

Well, my hippie-plan backfired, I scored 1100. This is back when there were only two halves for scoring, language and math, totaling 1600. If I recall, anything above 900 was the rubber stamp you needed to be accepted into college or something. I was amazed that so many took it so very very seriously. I felt like I had gotten incredibly lucky, but today I think I was relying ultimately on my intuition.

The fact is I suck at taking tests. I engraved pre-known multiple choice answers for tests onto a pencil in high school. I cheated as much as I possibly could on knowledge-based things, I couldn’t hang with having to memorize facts or remember details from reading books. I couldn’t do it, I didn’t seem to have the capacity. I loved to read, but still to this day I have a very difficult time recalling what I’ve read. The difference here is that I seem to learn through the telling of stories.

I noticed this. I began gravitating to disciplines that were more doing based. Because when I was given trials that asked me to perform, I excelled. This pushed me to lean even more heavily on being active in concert band, marching band, jazz band, theatre, set design, theatre orchestra, chorus, visual arts, sculpture, pottery, home economics, typing… you get the idea. I shunned physics, I didn’t take it. I got through Biology pretty well though. I was extraordinarily bad at Math, but I aced Geometry (still scared of Trig, didn’t take it). At graduation I was given an “Excellence In All The Arts” award. I carried a guitar on my back for much of my senior year. I veered as far as humanly possible from STEM.

So that’s really ironic if you know what I do for a living. My title is “Staff Infrastructure Engineer” and what I do is some weird amalgamation of things that probably no real Engineer would recognize as Engineering. I was given the title Engineer without showing any of the hard work many put into earning that title. To this day, I feel it’s erroneously conferred, that I still must live up to it.

I am realizing the originating reasons why I live in the world of intuition so much. I grew up under intense trauma. Without going too far into Complex PTSD, I have learned recently that all these things in the way my life developed are inextricably tied to that trauma (my chronic hyperacusis has driven me to seek healing). And one of the biggest things on the list is the constant presence of fight-or-flight.

I’ve lived with the feeling that I must escape at any moment, and still do. I explode in anger often. I am an intense actor onstage and have been praised for it. But when you’re in fight-or-flight mode, your memory management centers in the higher brain can be blocked by more important RUN OR DIE activity in the lower ’lizard’ brain. When you suffer PTSD, you become stuck in this mode. A common performers’ delimma is an inability to remember what you did onstage because you slip into this high-instinct flow mode where the brain disregards memory management.

A big reason I was so attracted to opera and musical theater as opposed to stage plays in the first place was largely because I couldn’t seem to memorize lines. And when I did, it disappeared quickly after the production was over. But when set to music, memorizing the script changed. I have no problems at all memorizing music, like “probably my tragic flaw” level of ability. Vocal music in particular seemed like such a natural fit for me, I would throw down multiple folk songs at lunch during high school for no reason but it was something I was good at and nobody else.

I am horrible at composing music and writing songs, the albums I have online are testaments of off-centered weirdness that appear to a unique and select few. But I thrill at improvisation and extemporaneous music making. I am a singer, an interpreter, an improviser… I am not a composer, not a draftsman, not an orchestrator arranger. I live in the moment way beyond the capacity of most humans, and I have recognized that for a long time. It wasn’t until now that I have connected it, and my learning disability, to the trauma I suffered. 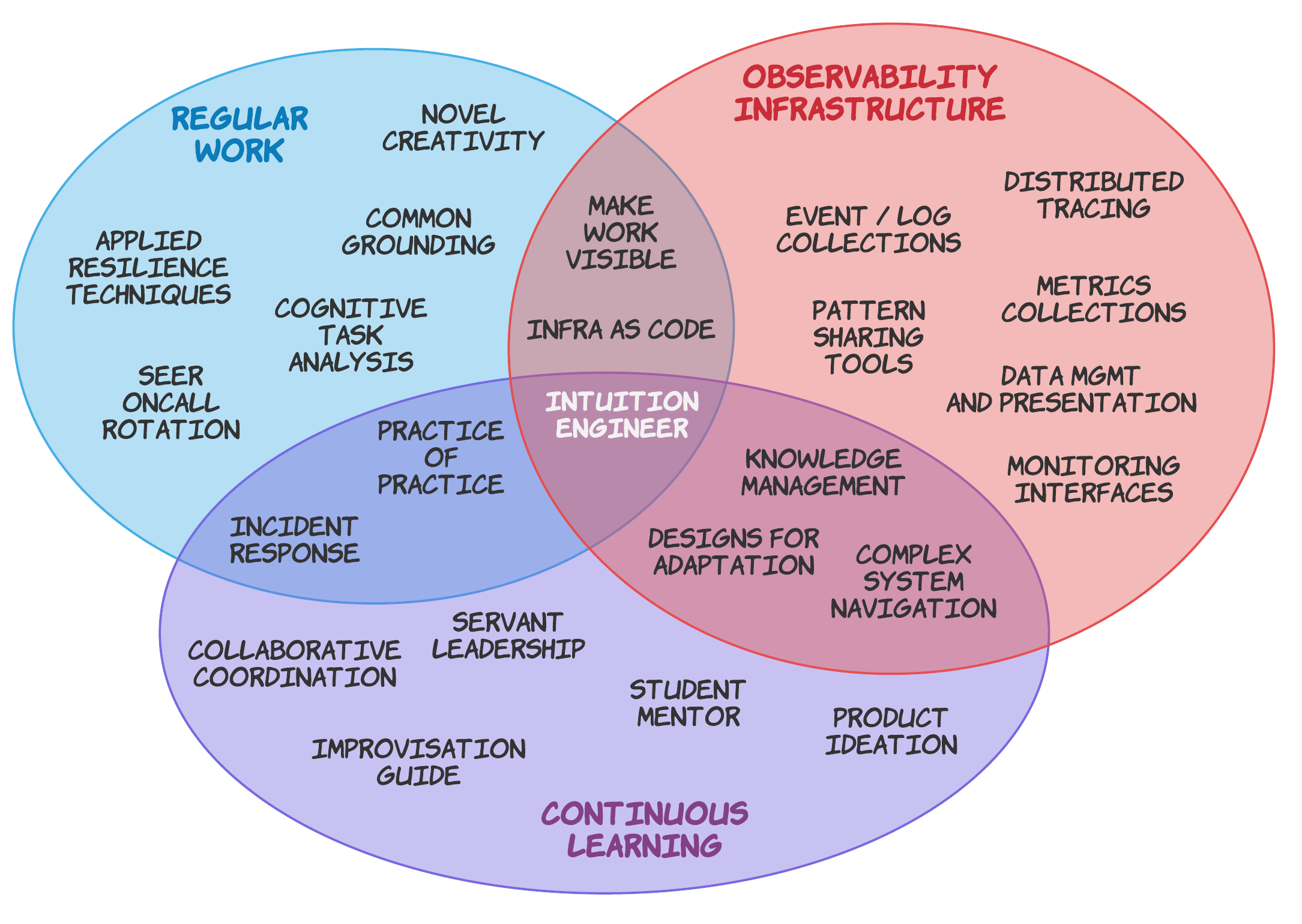 In my job, it occurs to me that I am more than merely an operator, more than just someone to run observability crossed with someone to contribute to strategy, more than reliability engineering (because guess what, I suck at being a programmer, too).

I sat down one day last Summer and created a Venn diagram about my work and goals, because traditional Engineering categories did not seem to me so clear. I listed everything I do and want to accomplish and organized them into relationships. When I began, I had not perceived a fitting Name for this Role.

What emerges in the diagram begins with the category of Regular Work and ways that Work-As-Done is examined and how it evolves. Its intersection with Continuous Learning is where Cognitive Systems Engineering techniques blend with the Practice of Practice and sharp-end teamwork. These human, learning relationships mix the synthesis of our socio-technical system with real-time knowledge from quantitative pathways; ’things we are’ blend with ’things we measure’. Human materials of beauty and craft are discoverable in our Observability systems, their patterns belie rhythms that we absorb through experience, they speak through our ability to adapt as a team.

Glueing these together, I see the Intuition Engineer as a critical staff+ IC leadership role in the organization, whether it is Named that or not. All my life I have been obsessed with improvisation and human expertise. After all the sharp-end experience, the research in musical improvisation, gigging as a professional musician and improviser, further study in Cognitive Systems and Safety, lots of years of experience in Operations and NOC and IT, threading together what the Practice of Practice can be in our technology teams… I see myself emerging as an Intuition Engineer.

An important job of the Intuition Engineer is to help the team be prepared to adapt when ambiguity and indeterminacy push the boundaries, for better or for worse.

It describes a person who feels the music of a live socio-technical system around them, not only crafting opportunities for discovery, but also being a guide.

Synthesizing observation tools and techniques, providing for an environment where the team can build new patterns of recognition from combinations of different perspectives, building group intuition through joint activity and collaboration.

I never knew I was as qualified as I am to be an Intuition Engineer until after I re-examined my own actitives, both in technology and music, now… the Spring after I first made the diagram. When I have come to learn that its subject matter defines my very embodiment, the outcome of trauma and a life stuck in adaptation mode. But also a life rich in music making and discovery.

What’s left for me to do is embrace it all and see what comes next.